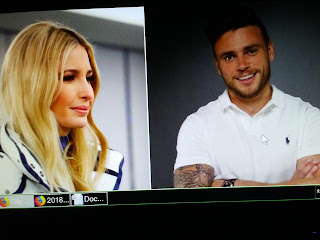 Gus Kenworthy has a lot of nerve to open his mouth to criticize Ivanka Trump.
This dude finished 12th and he's flapping his gums?  Gus needs to keep a low profile because the idea is to win the gold.  He fell woefully short.  In fact all of Team USA performed terribly finishing 4th I overall medal count after finishing 1st in 2014.  That's a big step backwards.


Fox News reports U.S. Olympian Gus Kenworthy was not pleased to see Ivanka Trump at the closing ceremony to the 2018 Winter Games in Pyeongchang, South Korea.

The athlete, who placed 12th in the slopestyle final, took to Twitter to voice his displeasure about having Trump in attendance with the rest of the Olympians representing the United States.
“So proud of all these people! Everybody here has worked so hard to make it to the Olympics and have the opportunity to walk in the closing ceremony!” he wrote along with a photo of the U.S. athletes at the closing ceremony. “Well… Everyone except Ivanka. Honestly, tf is she doing here??”