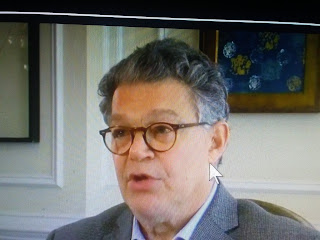 When a politician like Sen. Al Franken says he accepts responsibility for his actions but still wants to remain in the Senate
, it’s nothing but a whole bunch of empty words.  Hillary Clinton accepted responsibility for her misdeeds and continued to do her dirty underhanded stuff  like nothing happened.  Franken is no different.


ABC News reports in Sen. Al Franken's first interviews since allegations surfaced of his forcibly kissing one woman before he was a senator and groping different women, the Minnesota Democrat said he is "embarrassed and ashamed."

"I've let a lot of people down," Franken told the Star Tribune Sunday. "I'm hoping I can make it up to them and gradually regain their trust."

Franken, who was elected in 2008, in an interview with Minnesota Public Radio Sunday responded to radio host Leeann Tweeden's claim that he groped her while she was asleep on a military plane on her way home from a USO tour in 2006, when he was still a comedian.