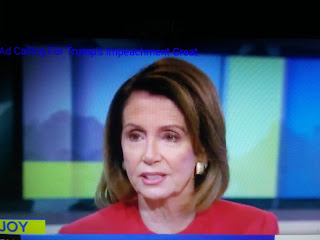 This is really incredible!  I still can't understand what she's trying to say.  Dementia looks like it's setting in.

American Mirror reports Nancy Pelosi’s trouble with the English language seems to be growing by the day.
During a Sunday morning appearance on MSNBC, the House Minority Leader stumbled over words, struggled to form sentences, and called special counsel Robert Mueller “mother.”

After calling an ad advocating for Trump’s impeachment “great.”
“If you become Speaker of the House in January 2019, will you push for the impeachment of this president,” Joy Reid asked Pelosi.
“You know, I’ve served a long time,” Pelosi responded, “on the intel— ethics committee in the Congress. It’s one of the dues that I’ve paid to the caucus and it’s only about the facts and the law.