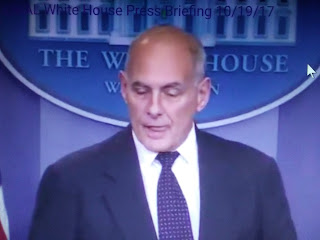 For some reason the idiots that make the White House press corps don't know the reasons that led to the Civil War.
Coming from a position of that kind of ignorance it's hard to explain it to simple minded-agenda driven reporters.  So when Kelly said a failure to compromise was one of the factors that led to war, to moronic reporters, it goes over their heads.


NY Post reports the White House on Tuesday defended Chief of Staff John Kelly’s statement that Robert E. Lee was “an honorable man” and that the Civil War resulted from the failure of the North and South to “compromise.”

“I don’t know that I’m going to get into debating the Civil War. But I do know many historians agree that a failure to compromise was a cause of the Civil War,” administration spokeswoman Sarah Huckabee Sanders said.

Asked if the compromise should have involved the issue of slavery, she offered only a vague response.