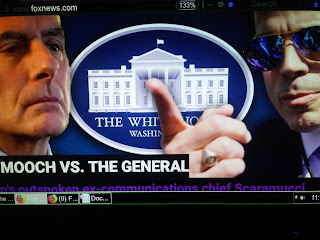 I normally don't do these types of stories because it's political gossip instead of hard political news.
But, it's Sunday, a pretty slow news day unless something unusual happens.


Fox News reports Anthony Scaramucci on Sunday criticized Chief of Staff John Kelly for his management style, arguing it’s too authoritarian and criticizing the former Marine general’s handling of the Rob Porter scandal,
while insisting the criticism is not revenge for Kelly firing him as President Trump’s communications director.

“What I’m really trying to do is lance the boil,”

Scaramucci, fired by Kelly after 11 days working in the White House, told “Fox News Sunday. “I respect the fact that he fired me. … I want him to succeed. It’s good for America.”

Kelly, since becoming chief of staff in July 2017, has been credited with bringing more order to the Oval Office. But he’s also been criticized for allegedly cutting off Trump from some on his most-trusted advisers.