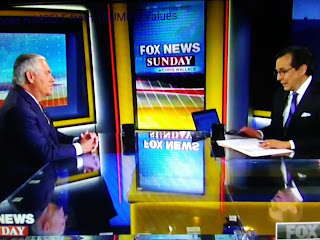 As far as I'm concerned this was the interview that started Tillerson's downfall.
Fast forward to 4 minute mark


Secretary of State Rex Tillerson needed to do a better job of understanding what happened at the Charlottesville protests
and how the media distorted the event and the comments made by President Trump.

It appears that Tillerson has accepted the media's fallacious narrative.

If that's the case President Trump doesn't need him in the position.  He either needs to see the light, apologies for his error, or resign and let somebody else who would be more loyal to the president take over.

Wall Street Journal reports President Donald Trump shook up his cabinet Tuesday by firing Secretary of State Rex Tillerson and choosing CIA Director Mike Pompeo as his successor, just as the White House plans to open talks with North Korea and a decision looms on the Iran nuclear accord.

The ousting of Mr. Tillerson, who first heard from the president about the move on Twitter, rippled through diplomatic circles around the world and set off a cascade of changes in the administration.