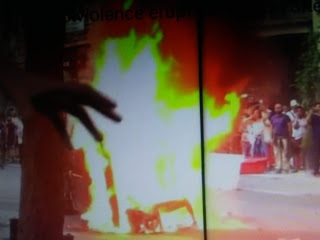 It's unacceptable for fans to act like hooligans after winning a championship.
I don't care what country it’s in.

Police forces fired tear gas as scuffles and pockets of looting broke out on the Champs-Élysées where a million people partied into the night.

People climbed on newspaper kiosks and bus stops in the area to wave flags while the Marseillaise national anthem rang out and cars honked their horns following the final whistle. But the celebrations soured as looters broke into shop fronts and smashed windows before they were driven back by riot police brandishing shields and batons.