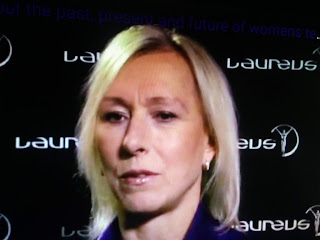 If there's anyone who has a noteworthy career to put Serene Williams in her place, it's Martina Navratilova.
Serena was getting beat by Osaka and couldn't handle it.  Her meltdown was a purposeful changing of the subject to draw sympathy for herself and take away the shine from Osaka.  It was a very bad look for Serena!


Fox News reports eighteen-time Grand Slam singles champion Martina Navratilova criticized Serena Williams' conduct during her U.S. Open defeat in the pages of The New York
Times Monday, writing that Williams engaged in behavior "that no one should be engaging in on the court."

Williams was cited three times by chair umpire Carlos Ramos during the second set of her 6-2, 6-4 loss to Naomi Osaka in Saturday's singles final. The first penalty, for getting coaching signals, earned her a warning. The second penalty, for breaking her racket, cost her a point. The third penalty, for berating Ramos and calling him a thief, cost her a game.