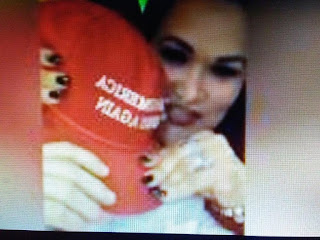 What a stupid woman!  Did she forget she was an illegal?
Whatever happened to living in the shadows?  No, we can't have that, right?  They feel bold enough to assault people wearing MAGA hats.

WCVB reports a woman who was arrested earlier this month for assaulting a man wearing a red "Make America Great Again" hat is now facing deportation after it was discovered she is in the United States illegally.
Rosaine Santos, a 41-year-old Brazillian immigrant living in Falmouth, Massachusetts, was charged with disorderly conduct, assault and battery after she allegedly attacked 23-year-old Bryton Turner, who was dining with a friend at Casa Vallarta Mexican restaurant on Feb. 15.