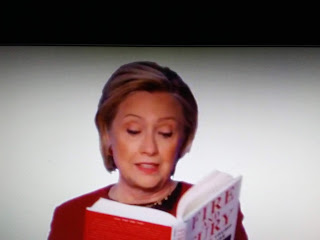 I think Trump goaded her into keeping the door open.
I hope she runs because we need the comic relief.


Fox News reports Hillary Clinton made headlines Monday when she told a local New York news channel that she would not run for president in 2020.

"I'm not running, but I'm going to keep on working and speaking and standing up for what I believe," the former presidential nominee told News 12 Westchester. She insisted that she would remain relevant and has no plans of "going anywhere."

But late Tuesday, Maggie Haberman, a political reporter for the New York Times, tweeted that she spoke with a person close to the former secretary of state. The unnamed source said Clinton was not trying to "be emphatic and close the door on running" with the comment and was apparently "surprised" at the reaction.