What happens when progressives run the show: Democrat New York Mayor Bill de Blasio and ‘co-mayor’ wife have wasted $1.8B of taxpayer money 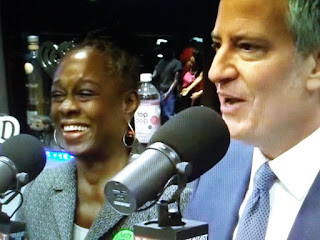 New York City has become a homeless camp, the streets are a mess with potholes, NYCHA has a different scandal everyday, and these two people waste over a billion in taxpayer money and nobody can account for where the money went.
And they're not going to prison?

NY Post reports who’s got a billion to burn?

Well, Bill de Blasio for sure.
But also mayoral spouse Chirlane McCray, who has just been revealed as a world-class boondoggler in her own right.

Hey, the family that preys together stays together, right? And it’s only (your) money — even if it is quite a lot of it.

McCray is the proprietress of ThriveNYC, a mental-health-related something-or-other created four-plus years ago to give a little heft to the conceit that Bill and Chirlane were elected as co-mayors — which is nonsense on stilts.

That is, once upon a time, first spouses were content to pretend to be in charge of prettifying highways and things. It was honorable “work,” it didn’t cost very much and it filled up the spouse’s free time.