Trump to Bernie: Let the Boston bombers, I don't think so 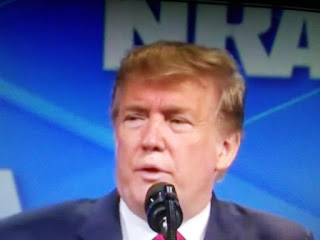 Bad enough Bernie Sanders is a whacked out socialist.
But, this is the kind of judgment that engulfs the Democrat Party.  He's not the only one.  That's why this party doesn't deserve to be in the White House.

AOL News reports President Trump and Vice President Mike Pence on Friday delivered speeches at the National Rifle Association’s annual conference in Indianapolis, where they sought to frame the 2020 presidential race as a competition of freedom (their side) versus socialism (the Democrats) and previewed a likely Republican talking point in the campaign: the proposal by Sen. Bernie Sanders to allow prisoners to vote in elections.
Sanders, a leading Democratic presidential contender, said during a CNN town hall that he believes every American citizen — presumably meaning those at least 18 years old — should have the right to vote, even felons serving life sentences.
“Let the Boston bomber vote,” Trump said, mockin