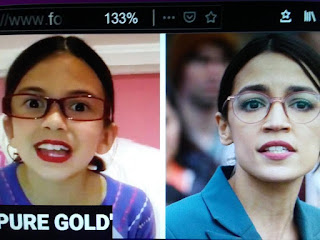 This little girl totally nails AOC in her mannerisms.  Hilarious!

Fox News reports the eight-year-old impersonator of Rep. Alexandria Ocasio-Cortez, D-NY, is back with a new video
Ava Martinez poked fun at the freshman congresswoman’s Green New Deal, also showing off her brand new pink "electric car" in the short clip.
"Like, hello America, AOC here again, but this time from Washington, D.C., which is named after our country's first president, George Washington D.C. Like, did you know that?" impersonator Ava Martinez began.
"I came up with my plan after we were watching, like, the most important documentary on climate change. It’s called 'Ice Age 2: The Meltdown,'" the mini AOC told her fans. "That’s not me saying it, that’s science! My Green New Deal will cost, like, 93 trillion dollars. Do you know how much that is? Me neither. Because it’s totally worth it. If sea levels keep rising, we won’t be able to drive to Hawaii anymore!"

As long as Ava #miniAOCofficial enjoys doing these videos she will continue to keep making them and as long as #AlexandriaOcasioCortez keeps being #AOC we will have plenty of material to keep making them as well. Thanks again to everyone who had kind things to say about Ava. pic.twitter.com/Sn6VRTNiCB
— SickenTirade (@SICKENLAW) May 13, 2019