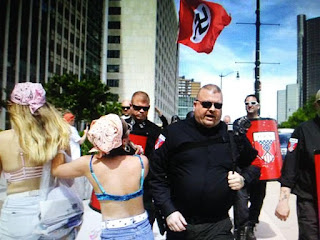 These are two small groups that are over represented in the media for political purposes.
But, this is what free speech looks like.  You’re not goona like it all the time.  But, it is what it is.


Daily Mail reports White supremacists caused outrage among the LGBT community when one of them appeared to urinate on an Israeli flag and gave Nazi salutes during a Pride event in Detroit.

The National Socialist Movement  (NSM) interrupted the family-friendly event on Saturday, holding placards with their slogan and swastika flags.
The white nationalist group is one of the largest neo-Nazi organizations in the United States and is known for anti-Jewish and racist protests.
Images show LGBT supporters attempting to block them joining the event. Police are seen in the vicinity.