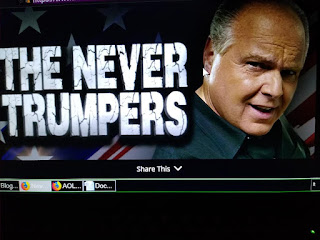 The below is a portion of a full transcript of what Rush Limbaugh had to say about the NeverTrumpers.
These people that make up the conservative intelligentsia, George Will, Bill Kristol and others have joined in with Democrats to defeat Trump.  Rush really let them have it and these NeverTrumpers deserve nothing but our scorn for being complete frauds.  Read the whole transcript because it's Rush at his best.


"These people love that, but we don’t. But the Never Trumpers, the neocons, they loved it. And then there are the George Will types, I call ’em, who just hate Trump for everything and for any reason on principle. They see Trump as incompetent, a boob. They see him as corrupt. Combined with this is this Never Trump factions nose is permanently out of joint because these are the people that thought they ran everything. They thought they ran the Republican Party and the conservative movement from Bush 41 all the way through Obama, and now they are irrelevant. And they are having a devil of a time dealing with the fact that they used to think they were it, to now realizing they’re irrelevant. Stick with me on this, folks, ’cause this is fascinating stuff."