Self Righteous, Phony, Enabling Academy member: Weinstein must be expelled for life 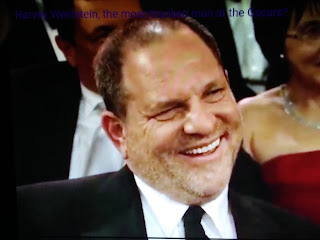 Look, for be it from me to defend Harvey Weinstein, but if anybody thinks he's only sex viper in Hollywood, it’s the utmost in naivety.
That town is filled with other bigwigs doing the same kinds of things Weinstein did to women, men, and children!  Everybody know who's who and what they’re doing and it's all kept quiet.

So spare me the faux indignation!  That dog doesn't hunt.

In the wake of the Harvey Weinstein scandal, the Academy of Motion Picture Arts and Sciences — the 8,000-plus actors, directors, etc. who hand out Oscars — will meet today to discuss “any actions warranted” against the executive. (Earlier this week, the British Academy of Film and Television Arts suspended Weinstein’s membership.)

Donald Rosenfeld, who has been a member of the Academy since 1992, feels strongly that Weinstein’s membership should be revoked. Here, Rosenfeld, a New York-based film producer whose credits include “The Tree of Life,” “Effie Gray” and the Oscar-nominated “The Remains of the Day,” explains why Weinstein should go.

What they need to do is flush out all the sexual predators and pedophiles that still preying on victims today.
at October 14, 2017