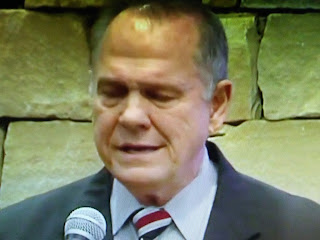 The only poll that matters is the special election on December 12th.
But, I feel despite all the false accusers, the underhanded dirty tricks by both Democrats and Republicans, and the constant negativity by the corrupt media, the people of Alabama will make Judge Roy Moore their next senator.

The poll from WT&S Consulting of 11,641 likely voters conducted from November 18 to November 20, with a margin of error of 1.2 percent, has Moore at 46.4 percent—towering six points over Jones, who is stuck down at 40.5 percent—while 13.1 percent are undecided.