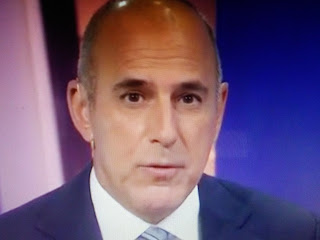 Well, there it is.  But, I gotta say I don't believe the allegations against Matt Lauer are true as reported.
We're going through a sexual harassment mania that is consuming a lot of people.  It doesn't mean stuff didn't happen.  Nevertheless stories could be either being blown out of proportion, or totally made up.

NY Post Page Six reports among the women accusing “Today Show” anchor Matt Lauer of sexual misconduct is one who claims she was assaulted by him in his office, according to a published report on Wednesday.

The women told The New York Times that Lauer called her into his office in 2001 and then locked her in with a button at his desk.

Lauer then asked her to unbutton her blouse and she complied, she told the paper.
The disgraced anchor then bent her over a chair and had sex with her before she passed out, according to the woman’s account.