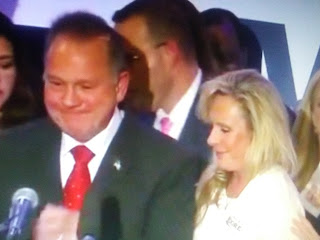 No weapon formed against him will prosper!
Judge Roy Moore has taken every blow the corrupt media, Democrats and Republicans have thrown against him, and he's still standing tall.


Breitbart reports at a rally in a small church outside Mobile in Theodore, Judge Roy Moore—the GOP nominee for U.S. Senate—fought off allegations against him and rallied supporters to his side with two weeks to go in the race.

Moore used the speech to frame the election as bigger than between himself and his radical Democrat opponent Doug Jones—whose leftist positions he exposed from the pulpit—and to set his campaign on track for the final two weeks of campaigning ahead of the Dec. 12 general election.

Moore opened his speech saying, “On January 17, 1776, George Washington led the troops across New Jersey. The famed Thomas Payne wrote these words: ‘These are the times that try men’s souls,’”
Moore said there is a “battle raging before us” and Payne’s words fit it: “These are the times that try men’s souls,” he said. “My soul is being tried and many of you have souls that are being tried. But more important than that, this is a time where the soul of this nation is being tried. In November of 2016, we elected a new president: Donald Trump.”
The crowd went wild.