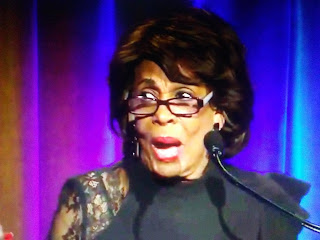 Democrats think they're scoring points putting up Maxine.
She should give a national address everyday because she's the gift that keeps on giving.

BuzzFeed reports one of President Donald Trump’s fiercest critics on Capitol Hill will address the country just after next Tuesday’s State of the Union.

Rep. Maxine Waters, a California Democrat, will speak at the top of a BET News special after Trump delivers the State of the Union, a BET spokesperson told BuzzFeed News. The program, “Angela Rye’s State of the Union,” is part of a broader partnership announced just days ago between the network and the Democratic strategist and political commentator. Rye will executive produce news programs with a sharp focus on issues facing black Americans. The programs will run quarterly, BET said in a release.

The spokesperson said activists and some elected officials will analyze Trump’s first year in office on the program, and will talk about “building black politics and the value of engagement across today’s socio-political landscape.”