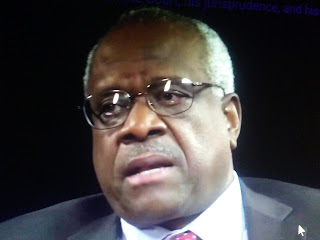 Gimmie a break!
I think there should be #ForgetMeToo movement for allegations that ae decades old.


AOL News reports one of Supreme Court Justice Clarence Thomas’ sexual harassment accusers penned an op-ed calling for his impeachment from the bench.

Angela Wright-Shannon, a former Charlotte Observer editor, wrote in her HuffPost essay published Monday that Thomas should be brought to justice after multiple women had accused him of sexual harassment — including herself.

She previously claimed Thomas had asked her breast size and repeatedly pressured to date him when they both worked at the Equal Employment Opportunity Commission in the mid- 80s.
Wright says women of color have a tough time