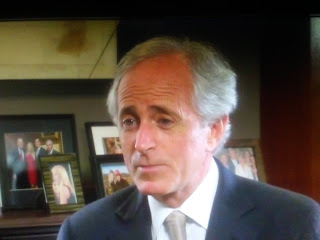 Why should anybody listen to one of the most cowardly Republicans in the Senate?
Sen. Bob Corker has already announced that he's leaving the Senate and won't run for reelection.  The GOP is in control of both house of Congress and with a Republican in the WH.  And this guy wants to leave?  He's a yellowbelly coward as far as I'm concerned and not worth any attention.

Corker gave a lengthy interview to The New York Times Sunday in which he laid out his concerns about the president, who he endorsed during the election. The two feuded on Twitter earlier Sunday with Trump claiming Corker isn’t running for re-election in 2018 due to the president not endorsing him, and the Tennessee senator comparing the White House to an “adult day care center.”

“He concerns me,” Corker told the Times about Trump. “He would have to concern anyone who cares about our nation.”

This clown Corker is one of the biggest reasons why the Iran nuke deal happened because he gave away Senate oversight.
at 10/09/2017 08:27:00 AM