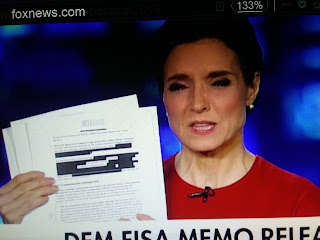 Here's the bottom line.  The DNC, the FBU , the DOJ, and the corrupt media were in cahoots to keep Hillary out of prison, get her elected, and defeat Donald Trump.
Robert Mueller, who I call the DC Lagoon Creature is out to get Trump too and remove him from office.  All the law breaking and collusion with the Russians were done by the Democrats and there is ample evidence to prove it in a court of law to send James Comey, Loretta Lynch, Susan Rice, and a slew of others to prison.

Fox News reports President Trump on Saturday dismissed a Democratic rebuttal to the GOP memo outlining government surveillance abuses in the 2016 campaign as a “total political and legal bust," claiming that it only confirms the ”terrible things” that were done by the nation’s intelligence agencies.
The rebuttal, written by Democrats on the House Intelligence Committee, concluded that officials at the FBI and Justice Department “did not abuse the Foreign Intelligence Surveillance Act (FISA) process, omit material information or subvert this vital tool to spy on the Trump campaign.”
Democrats sought to counter claims made in a Republican memo released this month that the FBI and DOJ relied on a Democrat-funded anti-Trump dossier to ask the FISA court for a warrant to monitor Trump adviser Carter Page. Democrats have claimed that the Republican memo leaves out important information.