NFL players now taking their protests onto the field 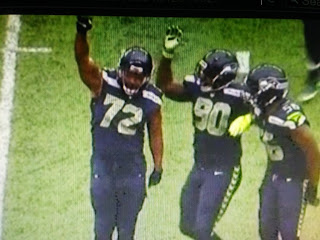 The NFL is sadly mistaken if they think this is not a problem.
Fans want to see football, not politics.  The BFL needs to wise up and put a clamp on these types of demonstrations otherwise fans will tune out and won't come back.


NY Post reports the NFL would prefer the players’ now-ubiquitous protests take a back seat to the action this season, but it looks like the league won’t get its wish.

If anything, the players seem ready to take their social critique beyond sitting during the anthem.
Seahawks defensive end Michael Bennett, who is among the ranks of NFL players to sit during the national anthem, celebrated a sack Sunday afternoon with a single raised fist.

Bennett was the first Seattle player announced during pregame introductions before the home opener against the 49ers and received one of the loudest ovations.

Then he took what’s become his usual seat on the bench during the national anthem.
Protesters supporting Bennett, who says he was subjected to racial profiling and excessive force when Las Vegas police detained him last month, gathered outside the stadium.