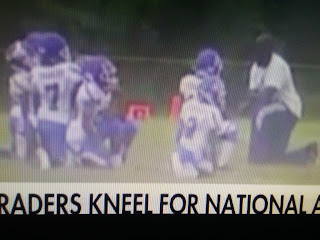 This is disgraceful  Is it too much to let the kids just play football?
It isn't about the youth players, it's about the parents using their kids to make a political statement.  They're the ones being the cowards hiding behind their children.  Very inappropriate and a example of horrible parenting skills.

Fox News reports a youth football team in Illinois knelt for the national anthem before one of their games over the weekend in a Colin Kaepernick-inspired protest.

Every player on the 8-and-under Cahokia Quarterback Club football team took part in the protest before Sunday’s game in Belleville.

“One of the kids asked me if I saw [people] protesting and rioting in St. Louis," Coach Orlando Gooden told Fox 2. "I said yes. I said, ‘Do you know why they are doing it?'”

Coach Gooden said the player responded, "Because black people are getting killed and nobody's going to jail.”