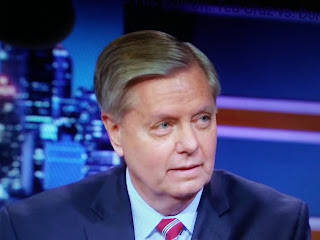 Typical Lindsey Graham seeking the media attention he craves so much.
This guy couldn't get above .05 in the polls when he ran for the GOP nod.  I think it's pretty oblivious Graham still holds a grudge for getting his ass kicked by Trump.


Fox News reports special counsel Robert Mueller’s charges against former Trump campaign chairman Paul Manafort and two other aides mark a new phase in his sprawling investigation into Russia and President Donald Trump. But the president’s supporters on Capitol Hill have said they want all the facts to come in first.

There “will be holy hell to pay” if Mueller is dismissed, Senator Lindsey Graham, R-S.C., told Fox News on Monday, unconcerned about rumblings of the ongoing threat Mueller poses to the president. He said there is zero evidence from the White House that Mueller’s investigation will be stopped or curtailed.