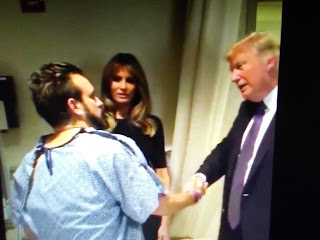 Wow, incredible!  We have a lot of losers in this country who can't get over Hillary losing the election.
Sad people indeed!

AOL News reports Thomas Gunderson shot in the leg during the Las Vegas massacre on Sunday found the strength to stand for President Trump when he visited recovering victims in the hospital earlier this week.
The president and first lady Melania Trump visited Gunderson, who was among the more than 500 people wounded at the Route 91 Harvest Festival last weekend, at the city’s University Medical Center on Wednesday, where they posed for photographs and chatted.
The 28-year-old from Newport Beach, California, took to Facebook shortly after to post a video of the encounter which later went viral, writing: “I will never lie down when the President of this great country comes to shake my hand!
“There may be plenty of issues in this country but I will always respect my country, my president, and my flag. Shot in the leg or not, I will stand to show my president the respect he deserves!”