What a Punk!: Quentin Tarantino admits his then girlfriend Mira Sorvino was sexually harassed by Harvey Weinstein and did nothing about it 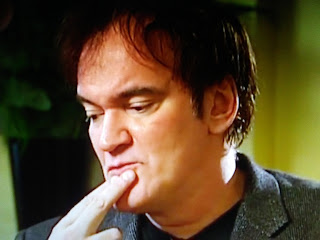 Making movies with Weinstein was more important to Quentin Terantino than protecting his girlfriend.
A "real man" would stepped up and straightened Weinstein out!  Not a good look for Tarantino.

CNN reports Quentin Tarantino, the famed director and frequent Harvey Weinstein collaborator, said in an interview that he had heard accounts of abuse by Weinstein and regrets not acting on it.

"I knew enough to do more than I did," Tarantino told The New York Times in a story published Thursday. "There was more to it than just the normal rumors, the normal gossip. It wasn't secondhand. I knew he did a couple of these things."

"I wish I had taken responsibility for what I heard," he added. "If I had done the work I should have done then, I would have had to not work with him."

In the past two weeks, more than 40 women have come forward with allegations of rape, sexual harassment or assault since the New York Times first published an article exposing decades of Weinstein's alleged misdeeds.

Tarantino said his knowledge of at least one allegation goes back to 1995, when his then-girlfriend Mira Sorvino told him Weinstein made unwelcome advances.

At the time, Tarantino said, he thought it was an isolated incident.

"I thought Harvey was hung up on her in this Svengali kind of way," he said. "Because he was infatuated with her, he horribly crossed the line."