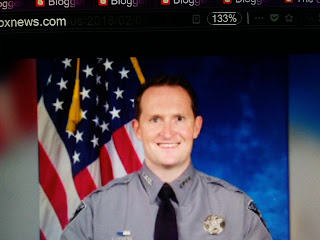 Fox News reports one deputy was killed and three other law enforcement officers were shot in Colorado Springs on Monday, investigators said.

Deputy Micah Flick, with the El Paso County Sheriff's Office, was shot while investigating a motor vehicle theft, officials confirmed. Monday was his 11th anniversary with the department, and he left behind a wife and 7-year-old twins.