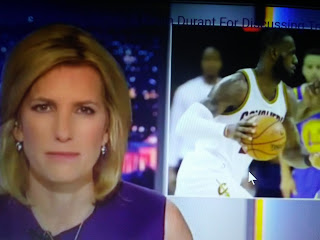 What LeBron James doesn't understand is that basketball fans don't give a hoot about his political opinions.
They care about how he hoops, that's it.  However If he wants to enter the political fray, and nobody is stopping him, not even Laura Ingraham, then he ought to expect pushback to come his way (shut up and dribble).  That's the way the game of politics is played and it's a much nastier game than basketball.

NY Post reports LeBron James dissed Fox News Channel host Laura Ingraham on Saturday – calling her “whatever her name is” and vowing to keep speaking his mind on social issues.

The Cleveland Cavaliers superstar, speaking to reporters in Los Angeles ahead of Sunday’s NBA All-Star Game, rejected the FNC host’s call this week to “shut up and dribble.” She was responding to James’ earlier comments that President Trump doesn’t “”give a f–k about the people.”

“We will definitely not shut up and dribble,” James said. “I would definitely not do that.”
The NBA icon sarcastically thanked Ingraham for bringing him attention – though the 33-year-old never called the FNC host by her name.