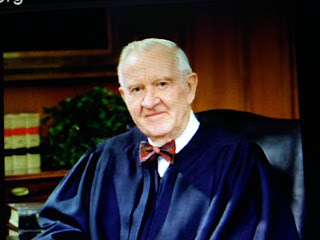 That's it!  That's what's really behind the March for Our Lives and all the other rhetoric about sensible gun control.
What Libs want is to incrementally get to the confiscation of all guns from the population.  Justice Stevens confirms what we all knew from the start.


Fox News reports John Paul Stevens, the 97-year-old retired Supreme Court justice, is calling for the repeal of the Second Amendment and is encouraging anti-gun protesters to do the same.

Stevens, once the leader of the court's liberals, said the “schoolchildren and their supporters” who have been demonstrating against school shootings should “seek more effective and more lasting reform.”

“They should demand a repeal of the Second Amendment,” Stevens wrote in an op-ed for the New York Times on Tuesday.

Stevens argued that the amendment – which states that “a well regulated militia, being necessary to the security of a free state, the right of the people to keep and bear arms, shall not be infringed” – is a “relic of the 18th century.”