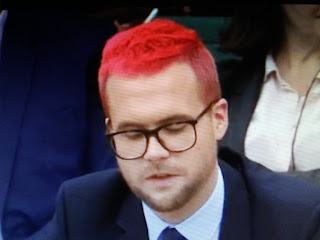 I wouldn't doubt the validity of this claim.  So I wonder if folks would continue to delete their FB
accounts.
But, would that make any difference in our would that tracks everything we do?


PJ Media reports Cambridge Analytica whistleblower Christoper Wylie, appearing before a committee of British MPs on Tuesday, said that Facebook has the ability to spy on users in their homes and offices.

The British parliament is investigating Cambridge Analytica's involvement in the Brexit election. MP Damian Collins, who chaired the committee, asked Wylie whether Facebook has the ability to listen to what people are talking about in order to better target them with ads.

"There's been various speculation about the fact that Facebook can, through the Facebook app on your smartphone, listen in to what people are talking about and discussing and using that to prioritize the advertising as well," Collins said.