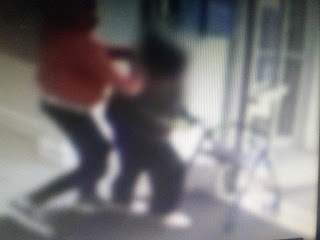 I believe a suspect like this who rob, assault, the elderly or the disabled should be shot on sight by the police.
Skip the trial or due process and send a message to other potential perps that this crap will not be tolerated.


PIX 11 reports the NYPD is searching for a man who placed his victims in a chokehold in two robberies that were committed in the same Bronx apartment building.

Police released surveillance video of the most recent incident. It happened on April 12 in a building located near the intersection of Third Avenue and East 167 Street.

A man approached a 68-year-old man with a walker from behind, placed him in a chokehold and dragged him to the building's staircase. The man took the victim's wallet, which contained $300, and cell phone from his pockets and fled on foot north on Third Avenue.

Cops believe the same man committed a similiar robbery on Feb. 4 in the same building. He placed a 48-year-old man in a chokehold and took the victim's wallet and cell phone, according to police.