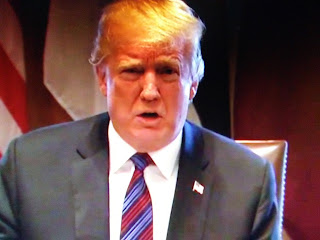 Mexico and Leftists elements in our country are forcing a confrontation for purely political purposes.

Fox News reports President Trump on Tuesday said that the U.S. will secure the southern border with the military until a wall can be built, calling the move a “big step.”
Trump made the remarks during a meeting with Baltic leaders, where he said he had discussed the matter with Defense Secretary Jim Mattis. A White House official revealed later Tuesday to Fox News that the plan considered by Trump would be a “substantial” mobilization of the National Guard.
“Until we can have a wall and proper security, we’re going to be guarding our border with the military,” he said. “That's a big step, we really haven’t done that before, or certainly not very much before.”
At a news conference later, he confirmed the plan, saying the border is unprotected by “our horrible, horrible and very unsafe laws.”