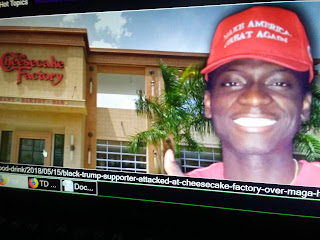 This is getting out of hand.  People need to respect others political views.

Fox News reports the Cheesecake Factory is investigating an incident at one of its Miami locations after a black customer claims he was verbally attacked by staff over his “Make America Great Again” hat, The Daily Wire reports.

Eugenior Joseph, 22, was reportedly dining with his girlfriend’s family at the Dadeland Mall location of the restaurant on Mother’s Day. His MAGA hat allegedly drew the attention of a female staff member, who gathered her co-workers to confront him, a witness told the site. A witness further claims about a dozen of those employees circled his table, pointing fingers.