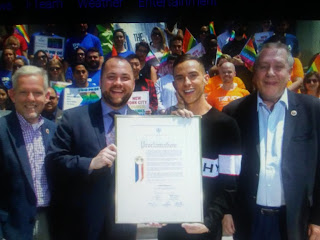 It's so funny how the Left celebrates losing over winning.
Adam Rippon failed to win the Gold.  I don't care how he has sex, he's a loser in my book.

"Adam Rippon is an out and proud role model for all LGBTQ people," said Dromm, who chairs the Council's LGBT Caucus. "His message of empowerment -- that it is great to be gay, and that we can excel at anything -- resonates with those who embrace the concept of equality and justice for all. Adam is not afraid to speak truth to power and has used his fame to stand up for LGBTQ young people across this country.

In my opinion, Adasm Rippon is not a role model.  There's nothing worth emulating in an immoral life style.   Christianity, Judaism, and Islam, faiths that represent billions of people believe that also.
at 6/11/2018 06:36:00 AM