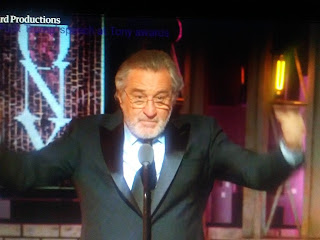 It's sad what has become of Robert De Niro as he's reached his golden years.
I'll still love his work but millions of people have refused to watch any of his movies ever again.

Variety reports Robert De Niro had a few choice words for President Donald Trump while the legendary actor was on stage at Sunday’s Tony Awards to introduce Bruce Springsteen’s musical performance.
“I’m going to say one thing, F— Trump,” De Niro said while pumping his fists in the air. “It’s no longer down with Trump. It’s f— Trump.”
The political sentiment earned De Niro a standing ovation from the crowd at Radio City Music Hall, while CBS scrambled to bleep the audio on the live telecast. After the audience settled, De Niro got back to talking about Springsteen, who received a special Tony Award during Sunday night. The intimate show, “Springsteen on Broadway” — or as De Niro referred to it, “Jersey Boy” — features the Boss performing his music and sharing stories from his 2016 autobiography “Born to Run.” Tickets to the exclusive concert residency, which has been extended twice, are upwards of $850.