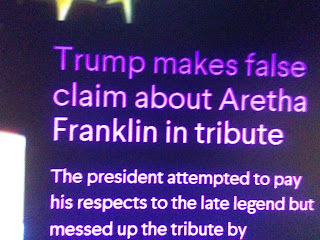 This is what President Trump has to say after the passing of Aretha Franklin.

Somehow the media cannot understand what Donald Trump meant when he said Aretha Franklin worked for him.  Some dullards on Twitter and other social media called him a liar.


"It wasn’t immediately clear exactly what the president meant by “worked for me,” although Franklin performed at the Trump’s Castle casino in 1988 and the Trump Taj Mahal Casino Resort in the 1990s, according to the Press of A"


It seems pretty clear what President Trump meant and the media very well knows it.  He owned hotels in Atlantic City and Aretha Franklin performed there numerous times according to his own statement.  And if you don't want to take his word for it.


"In 1988, she let employees at the now defunct Trump Castle watch her 2 1/2 hour concert rehearsal during their shift breaks in a 450-seat showroom"

Aretha Franklin  was a giant in the music industry with out of this world talent.  Millions are grieving her loss around the world, including President Trump.  He said as much.  Nonetheless, it was too much for the mainstream media to just report on his statement.  They had to add extra.  They had to attack him on this sad day.

This is the very thing why the media is so mistrusted and looked down upon by the American people.  These are not journalists!  They're petty little trolls with big egos and a gripe because Hillary Clinton got her ass kicked by Trump.  This is why the media IS the enemy of the people.  They've earned that reputation!