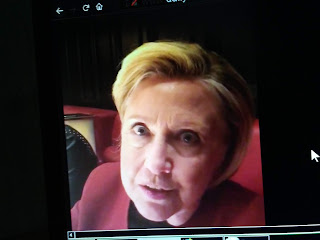 Hillary Clinton is an idiot!  But, besides that she's got a reckless and irresponsible mouth.
Talking about being uncivil encourages violence by the mob.  Somebody is gonna get hurt!

The stark repudiation of Clinton's comments by Sen. Heidi Heitkamp, D-N.D., a vulnerable red-state Democrat seeking re-election this year, comes as Republicans have lined up in recent days to criticize Democrats' fiery rhetoric amid the confirmation of Brett Kavanaugh to the Supreme Court.

“You cannot be civil with a political party that wants to destroy what you stand for, what you care about,” Clinton told CNN’s Christiane Amanpour on Tuesday. “That’s why I believe, if we are fortunate enough to win back the House and/or the Senate, that’s when civility can start again. But until then, the only thing Republicans seem to recognize and respect is strength.”