Corrupt mainstream media has nothing better to do than criticize Melania Trump;s Christmas décor 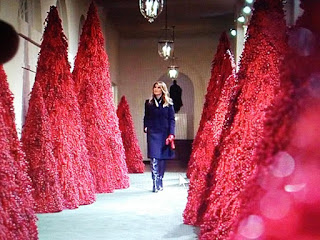 Knocking Christmas decorations?  Are you serious right now?
And the mainstream media wonders why millions of Americans don't respect their work, don't take them seriously, and hold them with very low regard.  Melania Trump is the classiest First Lady this country has EVER had.  That's why the media hates her because they know it in their hearts.


Fox News reports First lady Melania Trump brushed off criticism of her latest White House Christmas decorations and invited everyone to check them out in person during an appearance at Liberty University on Wednesday.

"It’s the 21st century and everybody has different tastes, I think they look fantastic,” the first lady said at a town hall discussion on America's opioid crisis.

“I hope everybody will come over and visit it,” she said as the crowd erupted in applause. “In real life, they look even more beautiful. You’re all very welcome to visit the White House.”

A variety of mainstream media outlets bashed Melania’s holiday décor when they were revealed on Monday. Many watchdogs came to her defense, noting that negative feedback was simply an example of hypocrisy from reporters who aren’t fans of her husband, President Trump