Bill in Drag: Jeffrey Epstein had a painting of Bill Clinton wearing a blue DRESS and red heels and lounging in the Oval Office 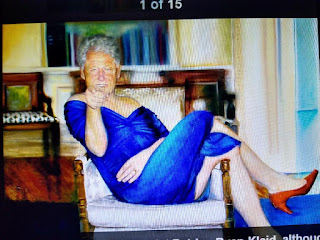 Weird doesn't even begin to describe this.
But, Bill Clinton used to hang out heavy with Jeffrey Epstein along with other big time Democrats.

Daily Mail reports Jeffrey Epstein had a bizarre portrait of Bill Clinton in a dress hanging in his Manhattan mansion, DailyMailTV can reveal.

The picture depicting the former president apparently lounging on a chair in the Oval Office, wearing red heels and posing suggestively in a blue dress redolent of Monica Lewinsky was in a room off the stairway of the Upper East Side townhouse.

The dress is also strikingly similar to one worn by Hillary Clinton at the 2009 Kennedy Center Honors.