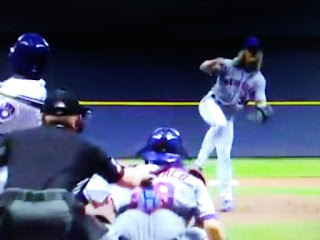 I'm really surprised at the amount of criticism Mets management is getting in the print media and sports talk radio of the Mets floating the idea of trading starting pitcher Noah Syndergaard.

How is that exactly?

Keep the starting pitching intact they say.  Uh, have you seen how woeful the Mets offense was last year?

Syndergaard is an asset that can be used to bring in major league talent in at least two or maybe three positions of need.  That's the kind of deal worth making that can address the Mets offensive attack.  If that kind of deal isn't out there, no harm no foul.  But, if the Mets can get a starting third basemen with a more consistent offensive approach along with a starting catcher and centerfielder, I say bye bye Noah and not look back.
at 11/21/2018 10:26:00 PM