Trump Says Shutdown to Last Until Agreement on Border Wall 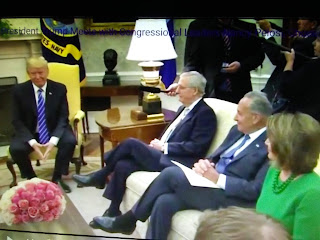 Stick to your gun, Mr. President!
The American people want the border wall as much as you do and are behind you all the way.


NewsMax reports President Donald Trump says parts of the government will stay shut as long as Democrats refuse to build more barriers on the U.S.-Mexico border, seemingly dashing hope for a Christmas miracle that would soon allow several departments to reopen and employees to return to work.

"I'll call it whatever they want but it's all the same thing," he said at the White House after offering holiday greetings to U.S. troops stationed around the country and the world.