'It’s a disgrace what's happening in our country, but other than that, I wish everybody a very Merry Christmas': Trump defends the border wall and can't resist attacking the Democrats and Comey before sharing a holiday message with Melania 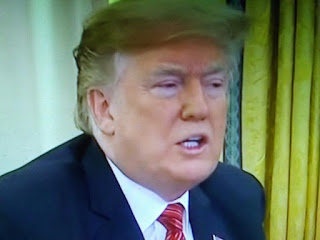 Although the corrupt mainstream media is not reporting it, President Trump is getting overwhelming support from the American people.

Daily Mail reports President Trump used his annual address to members of the armed forces to attack members of Congress and a former FBI director while defending his border wall and denying claims he colluded with Russia during the election.

During a photo op for that call, President Trump decided to defend shutting down the government over funding for his border wall and slam former FBI director James Comey.
He ended his remarks by declaring: 'It’s a disgrace what's happening in our country, but other than that, I wish everybody a very merry Christmas.'