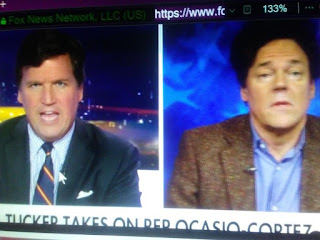 So the Green New Deal thinks it's okay to give
money to people who don't want to work?  I don't think this will sit well with Americans who bust their asses everyday to put food on the table.

FoxNews reports a top adviser to New York Democratic Rep. Alexandria Ocasio-Cortez has admitted that an official "Green New Deal" document posted by Ocasio-Cortez's office contained a guarantee of economic security even for those "unwilling to work" -- but not before he went viral in progressive circles for claiming the exact opposite, repeatedly, in an interview with Fox News' "Tucker Carlson Tonight."

Cornell University Law School Professor Robert Hockett, who counsels Ocasio-Cortez on environmental initiatives, challenged host Tucker Carlson when he quoted from an outline and list of "frequently asked questions" (FAQ) that had been posted on Ocasio-Cortez's official website. The FAQ was also shared with NPR.