Liberty U. students protest Jerry Falwell Jr., wife for saying their granddaughter will be raised 'as a girl' 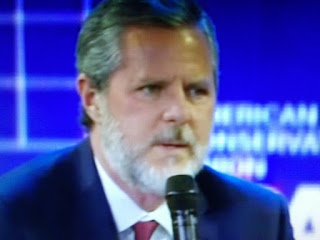 It doesn't make sense to me that Liberty U students would take issue with what Jerry Falwell's wife had to say.
This is a Christian school!  Why are they going to Liberty University if they cannot accept Biblical teaching?  They need to find another school and take their Liberal ideology with them.

The Blaze reports Jerry Falwell Jr. — president of Liberty University — and his wife Becki took the stage on campus last week for a Conservative Political Action Conference satellite interview with Donald Trump Jr. and former Fox News commentator Kimberly Guilfoyle.
And as you might expect, conservative-leaning opinions began to fly.
At one point, Becki Falwell noted that the couple's granddaughter Reagan, just weeks old, would be raised "as a girl."
"She's our granddaughter, and we're raising her as a girl," she told the crowd. "We're not letting her have a choice. ... God makes the choice of what the babies are going to be, and God decided she would be a girl."