Time to Get Pay Back: Aircraft carrier sent to Middle East after indications Iran planned attack on US forces 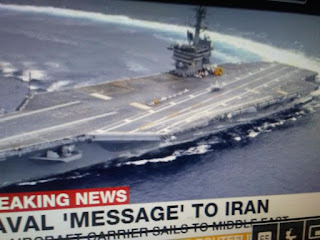 If Iran wants to gt some, we definitely owe the pay back!
I don't have a problem getting into a conflict with Iran.

ABC News reports the United States is deploying an aircraft carrier strike group and a bomber task force to the Middle East on short notice in response to "clear indications" Iran and Iranian proxies were planning an attack on U.S. forces in the region, a U.S. official said.
Late Sunday night, the White House made a surprise announcement that the USS Abraham Lincoln and a bomber task force were being deployed in response to unspecified "troubling and escalatory indications and warnings."