Kim Kardashian returns to White House to discuss criminal justice: 'It really is such an honor to be here', 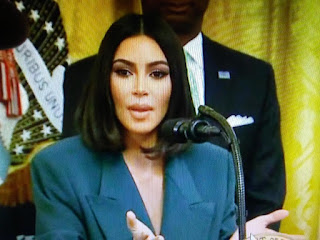 Here's the story behind the story the mainstream media will not report.
Trump's prison reform initiatives is making a impact in the minority community.  The media will never give him credit for it.  But, the communities of color will give Trump credit on Election Day.  And the media won't see it coming.

Fox News reports Kim Kardashian spoke at the White House on Thursday, appearing alongside President Trump boosting efforts to help people leaving prison return to the workforce.
Initially seated between Jared Kushner and Ivanka Trump, Kardashian, 38, was met with applause after President Trump mentioned the reality star in his opening remarks.
"It really is such an honor to be here today," Kardashian, who has been advocating for criminal justice reform issues, said when she took the podium. She called Trump's support of the "Second Chance" program "magic," and added that the initiative had partnered with rideshare organization Lyft to hand out gift cards for reformed criminals to get to and from job interviews.