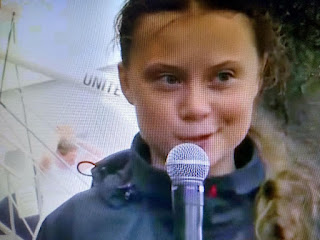 I heard this report on my local New York Today Show and the repeatedly reported that this teenage girl crossed the Atlantic by herself.
I found that very unbelievable and quite reckless.  True to form our corrupt media painted a false picture because she had a crew on her zero emissions sailboat.  Even a simple story like this the mainstream media is not telling the truth.

LA Times reports a 16-year-old Swedish climate activist who crossed the Atlantic in a zero-emissions sailboat anchored in waters off New York City on Wednesday as she prepared to land at a downtown marina.

Greta Thunberg and her crew were expected to arrive in Lower Manhattan in midafternoon after a two-week crossing from Plymouth, England.

As she approached New York’s harbor before dawn, Thunberg tweeted, “Land!! The lights of Long Island and New York City ahead.”

The teenager refused to fly to avoid a plane’s emissions. Action against climate change has been a theme of protests she’s led in Sweden that inspired student strikes in about 100 cities worldwide.