Enemy of the who? Bernie Sanders staffers rough up reporters in Iowa 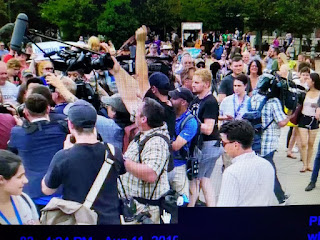 Bernie Sanders is a true thug!


The Blaze reports in a widely covered incident in this past June, Trump press secretary Stephanie Grisham was manhandled and left bruised by North Korean security as she attempted to protect U.S. reporters from being shut out at the hands of dictator Kim Jong Un's guards.

If, a month or so later, President Trump's secret service agents or staff were to likewise get rough with reporters, particularly a female journalist, the comparison to Kim would be at the top of every story on the subject. And there would be a LOT of those stories.

But when, at the Iowa State Fair candidate boondoggle weekend, staffers for the Bernie Sanders campaign were involved in just such an incident, the comparable quite from the press was deafening.